Mixers And The Single Woman 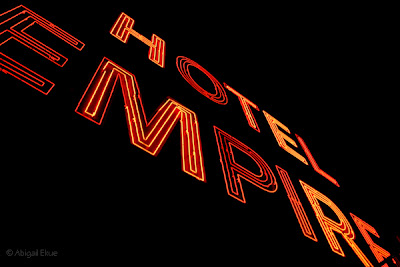 Recently I found out about a mixer/meet-up. I emailed the invite to a few friends to see who'd be interested in going. Geraldine and I decided to venture to the Empire Hotel on a Friday night.


I rarely go to mixers. Well, mixers that are advertised as mixers. I attended one earlier this year hosted by WTF Is Up With My Love Life. The object was to find new members for your gaggle. Admittedly, I was more interested in boosting my career. 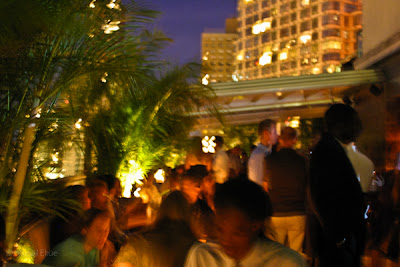 The scene at the Empire Hotel on that Friday evening was quite the phenomenon once I stopped to really notice what was going on around me. There was a lot of preening and watching. Most notably, the introverts watch and the extroverts compete. Subtle smiles are exchanged to test the waters. Once someone, anyone, decides to make the first move, it's like unstructured speed dating. There's no time limit and there may not be another "date" waiting when the one you're on is over, but with the volume of the music and the thought that someone "better" might walk by while you're talking to someone, there's pressure to learn all the pertinent information you can about someone, as soon as you can, to make a decision.


I really feel for men in situations like these. They are expected to make the first move, all the time. And of course that means, facing rejection some of the time. Women sit in intimidating groups and wonder why no one will strike up a conversation with them. You know my theory about going out alone. It works. Or if you do go out with girlfriends, split up for a while and tell me a (hopefully) handsome stranger doesn't approach you. 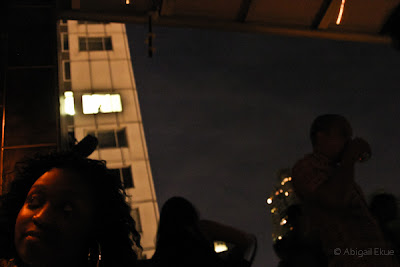 It was a pretty mixed crowd on that rooftop, but Geraldine and I introduced ourselves to a group of 4 or 5 Black men sitting by the bar. Unfortunately, they were younger than my younger brother and one looked like a younger version of Gary Anthony Williams (Malcolm in the Middle incarnation not Boston Legal) so my interest waned. They were pleasant though--asked where we were from, what we did, offered their seats and later invited us to go to Taj with them "Taj. That's on twenty-something street, right? Wow! I haven't been there in years!" I was dating myself on purpose. Hint-hint young lads. I declined the invite because I wasn't interested. The second time the "leader" asked me, I told him we were waiting for Geraldine's friend to join us (which was true!). 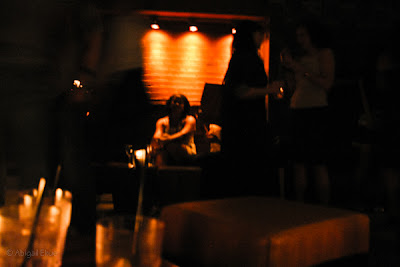 Now we were three. We had seats in a prime location. I saw lone lurkers, watched awkward pairings, there were groups of friends surveying the scene and I saw threesomes starting their parties right there in the crowd. That "alkeyhall" strikes again. It's amazing to see people transform under its influence. Before the end of the evening, I spoke to a few gentlemen, me being the one to approach them. And that's the other thing about men. They love that stuff. You don't think they're nervous to talk to you? Imagine the relief when a woman does the "hard part" (at one point during the evening, Geraldine had enough of one man walking by repeatedly, looking at her and not saying anything so she said something first). Ladies, if you have the ovaries to make the first move, do it. It's empowering and liberating. By doing that, you have more control over who you interact with. 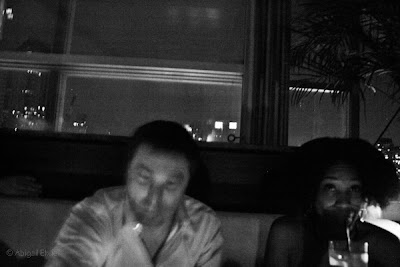 For my troubles, I got to feel up on a chiseled man I Will never forget. I felt him up when he asked for a hug. I'd gone over to him and his buddy to tell him that he'd caught my friends' eye and I asked if they were waiting for people. They were waiting for dates but in the meantime they came over to chitchat. They were genuinely pleased that I said anything at all. He said I was "real smooth". I just thought I was saying "hello" but I'll take "smooth". Was even told matchmaking may be in my future (I could combine that with my flirting field trips). So that's when I got the "hello" and a "goodbye" hug. hehe An energetic and direct professional posed for me and bought my friends and I drinks and I invited a man to sit with us. He later read us some of his poetry. Two out of the three men also turned out to be great professional contacts; it's not always about the romance, but if you get both in one package...


All this on a night I saw my first shooting star.