My Afternoon With The Italian Architect 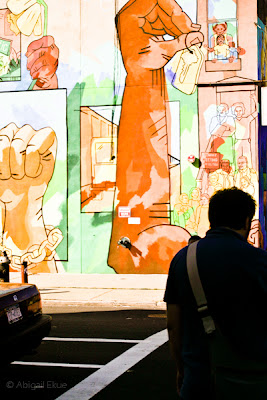 I spent a few hours with a 33 year old architect from Milan. He responded to an ad I posted online; he was in NY to learn English and wanted to meet me. I chose the time and place where we met in Brooklyn on a gorgeous afternoon.


We walked and talked. He's a professor of architecture in Italy. He taught me a lot about the history of NY architecture; he's very knowledgeable and passionate about his work. It was strange for him to now be the student (he's taking English classes during the day) and have homework.  He's the only Italian in his class; the majority of the students are Spanish-speakers. He was a bit disappointed because as he put it, he's close to Spain when he's home. He didn't want to cross an ocean for more Spanish. I mentioned that it was interesting that the Spanish-speaking students in his class were all European not from Latin America.


Throughout the afternoon he shared his take on the New York culture (and American culture, in general) that he's been exposed to and I pointed out local points of interests all while teaching or correcting his English when necessary. The prayer alarm blared as we passed a mosque. Sitting outside were two woman wearing burqas and niqabs. A few blocks away he asked about the America view of Muslims after 9/11. Him: Only in America do you see the words "healthy", "organic" and "fresh" on signs and menus, even to describe hamburgers and soda. He found the psychological babysitting in America amusing.


The sign at a gas station read 425. "Four hundred and twenty five cents?" he asked. "Yeah," technically he was right, "four dollars and twenty five cents for a gallon." I could see the math and conversion gears spinning in his brain. In Italy, he said it's roughly $1.10 a liter. He noted that he'd witnessed a lot of people hanging out in their cars with their doors open, engines running and music blasting. That sort of activity take place in Italy. Gasoline is too expensive. In the conversion of dollars to euros and liters to gallons it comes out to roughly $8/gallon in Italy. On the flip side, he's easily able to afford this trip and accommodations in the East Village, Chelsea and along the newly gentrified Bowery because the euro goes a lot farther here.


I also learned that some issues are universal. In Milan, there's a surplus of educated and skilled professionals and not enough jobs. His younger brother, in his 20's, is already married. He's a young professional, works hard, travels often for work and he's single. How many of us are in the same boat; single because there's no time to cultivate a relationship or no desire to until we "live a little more life"? 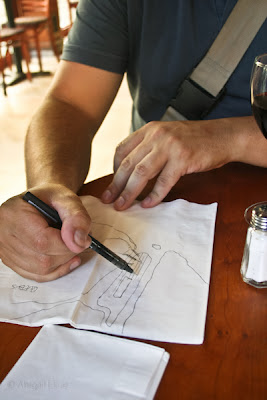 Near the end of our afternoon together, we decided to quench our thirst with a glass of wine. We'd covered many miles at that point. Based on his interests we'd spoken about earlier, I told him about an NY event taking place the next night I could get him entry into. He didn't have his map with him, so he drew one on a napkin so he could trace our path. He also drew me a map of Northern Italy and while he showed me where his hometown is in relation to major cities, I received a refresher course in Italian. When you speak someone's language it's a bonding experience. Between the Italian and the wine we became fast friends.


The afternoon we spent together is a prime example of the ESL/travel buddy/concierge service I provide. I also work with people relocating to NYC and native English-speakers. I'm booking clients. I look forward to the season ahead and can't wait to meet you~