I spent a rainy Sunday afternoon watching a Jurassic Park marathon. I'm a sucker for a good creature feature. In the third installment of the Jurassic Park (2001) franchise, part of the storyline is the Velociraptors (raptor) are intelligent and can communicate with one another with specialized calls. That aids them in hunting and they can also call one another for help. Dr. Alan Grant (Sam Neill) gives a lecture in which he theorizes that had it not been for the cataclysmic event that wiped out all dinosaurs, raptors could have become the dominate species on earth.

Hmm...
In come the apes.
One intelligent species against another.

I did enjoy Kong's battles with T-Rex... 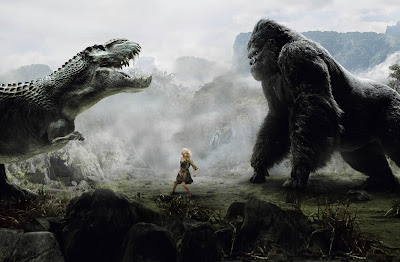 Perhaps this movie would be more... realistic. No giant gorillas manhandling three Tyrannosaurus Rexes (Tyrannosauri?)
What would be the plot of a Planet of the Apes Meets Jurassic Park movie? The apes are offered autonomy on Isla Sorna by man. Of course, they're not told that the island is inhabited by dinosaurs or man thinks the dinosaurs have all died out but don't realize the Velociraptors have simply outlived all the other species. Caesar and his tribunal agree that Isla Sorna will make a good home. They won't have to live with stupid, sick humans anymore.
Birds chirping, sun shining, ape picks up a raptor egg and has himself a little snack. He looks around and realizes he's hit the jackpot--a field full of these delicious treats. He collects as many as he can and takes them back to his family. 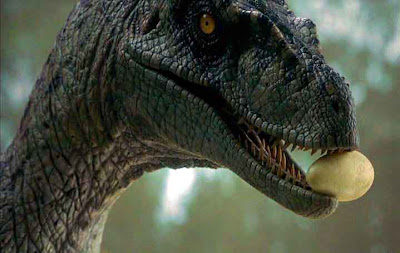 ZOOM OUT to reveal and beak and beady eyes of a Velociraptor watching the ape disappear into the thicket in a three-point gait.
Now if you remember, in Jurassic Park 3, the raptors were after the people because they had their eggs. Once they got their eggs back, they let the humans be. So perhaps the raptors will pursue the apes for the same reason (and be none too happy to have poop flung at them). Chimps being as aggressive and territorial as they are, won't be so willing to relinquish their bounty or be very happy that these "lizards" are trespassing.
CGI antics ensue.
Who would win? Apes (chimps, gorillas, orangutans) are stronger than raptors and can climb trees. Both have the ability to communicate and work together. The raptors are faster and attack and kill in groups. Chimps can use tools and weapons.
That's a creature feature I'd watch.
*   *   *