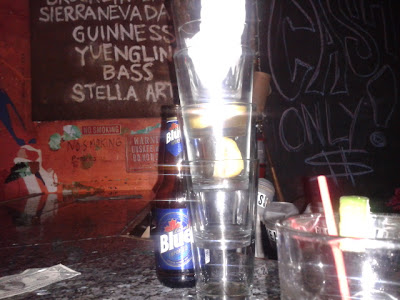 Last night, I ended up at Motor City Bar. I like that the vibe there is never pretentious, it's a great mix of clientele and it'll be the setting for my upcoming photo shoot (see: Graffiti Butt)

I had conversations with interesting men at the bar -- maybe because we didn't know one another we were more direct, more quickly. The underlying theme of our conversations: race.

"So whereabouts in Brooklyn are you from?"

I answered his question but later it hit me -- I didn't tell this man I was from Brooklyn. I asked how he knew I was "from Brooklyn" and he said he's been in NY for 25 years and has learned to "just tell". Moments before that, I tried to pinpoint the origin of his brogue. I guessed Ireland, he's Scottish.


While we compared geographical notes on Brooklyn he told me he rides his bike out to Flatbush for Ital food and asked if I know any good spots. I asked if he was strictly vegetarian (cause I wouldn't be much help if he were). He eats meat occasionally and has gone to a jerk spot that I'm familiar with.


He made social observations about the demographics of the neighborhood -- young, "off the boat" residents still populate Flatbush. We talked about the gentrification of Crown Heights (RIP my old apartment), how whites don't fear Bed-Stuy anymore and how many of the bartenders at his local LES bars (including ours that night) live in Williamsburg or Bushwick because they can't afford to live on the LES. The Scotsman is a former club owner and recounted (I may have sensed a hint of nostalgia) how rough it used to be in the neighborhood because there were guns everywhere. Now, in 2012 the neighborhood "still sort of looks dirty, but it's changed. It's expensive to live here now. And unless you have a rent-stabilized apartment or bought one when prices were cheap you're pretty much..." assed out (my words not his).


A buddy he'd been drinking and conversing with that evening joined us - a legend on the LES. His first words to me: What happened to real women? He, a Black man had just come from speaking with two white women so I can only speculate why he chose to ask me that question. We spoke for a good while after that (more on that in a later post). The LES legend, the Scotsman and I talked discussed the racial construct that is America.


The scenario we used were if we were victims of a crime and had to report it. Here in NY (America) we'd say a "white guy" robbed me or a "black guy" robbed me. In other parts of the world, those terms aren't used. "That bloody Englishman robbed me" is what the Scot would say. The LES Legend noted in Africa (loose term) if he described the suspect as a "black man" he'd get arrested for attacking himself because he'd fit the description. I added in Nigeria people identify by their tribes not "race" or skin color.


When the Scotsman made his exit, The LES Legend shook his hand and called him a cracker.