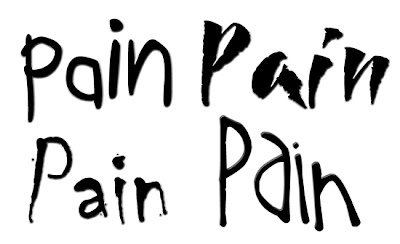 I've had a uterus my entire life. We've had a very amicable relationship. At about 3 pm on Monday afternoon something upset her. She slowly grew enraged. But I was weathering her storm. At about 8 o'clock while I was trying to wind down she was just getting started. I text a friend about these newfangled pains I was experiencing. I wasn't doubled over but was definitely uncomfortable. They say it helps to talk about your problems; you gain insight on how to manage them, solve them or perhaps they'll even go away. I don't remember when I dozed off but at about 11pm I was woken by CM Punk screaming into the pipe bomb and my uterus screaming louder. What the what? I made myself a little more comfortable but was determined to sleep this off like I could sleep off other pains.


Shame on me for not having any pain meds at home but I'm rarely in pain. Moaning and whimpering, I stumbled around my bedroom at about 2:30ish in the morning. Pain blurred my vision. Pain made me sweat. Not doubled over in pain, uh, Abigail? Merely uncomfortable, Missy? I slumped over the bathroom sink for a while when a wave of nausea hit me. If there's one thing I can't stand, it's nausea and vomiting. That was the push I needed. I swallowed hard and had a heart-to-heart with the grimace in the mirror. I needed meds. But I couldn't walk straight due to the pain (my vagina was now singing backup). Never in my life had I experienced pain like this. Who are these women who deal with this every month? I have a heating pad!...of sorts. I'd received samples from Wonder Warmers in a gift bag from an event I attended last month. I could only find one of them but that would have to do. In a deep crouch, I activated the heat pad and shoved it in my panties. 31 years I've housed this uterus and we've never faced off like this (she recruited my rectum to the party). Once the cramps were bearable I slipped on my sneakers and threw on my coat. The cold air and raindrops hitting my face were pretty refreshing. As I walked down the block I thought about how thankful I was to live in NY where I can literally walk one block to get medication at 3:03 in the morning. I was thankful for having the frame of mind to do it. I was thankful to have the money to afford the pills.


I got to the fruit stand and scanned the shelves behind the counter. Amongst the many products there was bitter root, Herbal Viagara, Theraflu and Motrin. I was gonna buy a few of the 50 cent single dose packages but asked the store owner if he had the bottle. Yeah, he did! Yeah, yeah, give me that. After that amicable exchanged, I managed a weak smile after I thanked him. As I was leaving the store, I saw a man standing with his back to the door but I had enough space to open the door and not hit him.


"Oh! You scared the shhhh..." he looked at me and I guess when he saw I was a woman, he decided against finishing that statement. I took a few steps passed him and stepped off the curb ready to cross the street but a car was approaching.


"Excuse me, excuse me," he said, "can I ask you something?" Are you fucking kidding me? I got on my holey sleep pants tucked into my sneakers, lopsided sleep afro, with a heating pad shoved into my panties and you wanna "ask me something?" I glared back at him past the fur of my hood for a few seconds then turned back around. "I just wanna ask you something. I'm not asking you for money." This time I turned more of my body towards him. Still silent. Studying every detail of his face. He motioned for me to come out of the street and back to the spot on the sidewalk next to him. "I said 'excuse me'..." he continued. And I didn't give a shhhh... I thought about delivering a thumping back heel kick to his kneecap or solar plexus. Perhaps I would go back on the sidewalk, kick his cane out from under him, grab hold of it and beat him senseless with it. Or motion for him to come toward me and then push him in front of the oncoming car. Before I went all I'm Gonna Git You Sucka on him, the car whizzed by and I crossed the street as he continued to call after me.


As I type this, I still have a heating pad shoved down the front of my panties and can't help but think how well this post will tie into the next post I'll write (one I would've already written if not for the pain). Women problems.