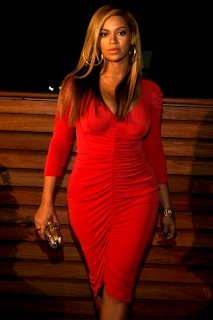 The above showed up on my Tumblr timeline this week. The reblogs and likes included comments like, "I can't believe she just had a baby!", "How can she look like that after giving birth!", "My goal is to look like Beyoncé", "Told you she was never pregnant!"


Why is it expected that a woman will look like a shell of her former self after giving birth? Yes, there will be changes in her body after pregnancy and childbirth but it's unusual for her to be "in shape" or "look good"? The way the body handles the changes (and trauma) of pregnancy varies from woman to woman. One factor that makes the "recovery" easier (and apparently, astonishing to some) is exercise.


Beyoncé was in great shape before she became pregnant. She joined the Let's Move! Initiative which encourages physical activity and educates on the importance of exercise. I'm assuming she remained active during and that exercise (dance, weights, yoga, whatever) will be a part of her life now that she's a mother. I hung out with a friend about 2 weeks after she gave birth and it didn't strike me as odd that she looked like she did before she got pregnant. Genetics do play a role, but activity is a huge part of it. She exercised on a regular basis for years before becoming a mother.

A friend of mine actually said she "aint doing nothing when she gets pregnant". Maybe she'll walk but that's it. Side-eye and no comment from me. Other women have that same attitude -- they aren't active and not very conscious of their diet, eating anything because they're "eating for two". It's not mandatory or healthy to gain 50, 70, 90 pounds during pregnancy.


That set off my thought process. I responded that I'm sure it's been a negative affect but that the comparisons need to stop. There are women who may be pushed to eating disorders and over-training but I'm referring to your average woman without mental health illness here. Beyoncé, Madonna (two women I've witnessed exercising at my former job), J-Lo and others in the public eye who have children make their money based partly on their image. Right or wrong, if they didn't look glamorous during pregnancy or never lost the pregnancy pounds (Mariah Carey) it would be a different sort of front page story. Let's not forget these women have tons of help with their children allowing time to workout with their celebrity trainers, have special meals prepared by private chefs and maybe in some instances are turning to surgery, who knows? But exercise is a part of their lives that needs more credit. Like the women I witness in Prospect Park walking, jogging or full out sprinting while pushing their all-terrain strollers, they understand the importance of exercise.