That's the one dollar bill I received as change for my umbrella purchase on Valentine's Day (before I came face to face with Bruno). The dollar itself was actually very crisp, but it "vandalized". When I looked closer, I noticed the statement: Fishbone Was Here! in the familiar Andy font. I also noticed the request to track the bill at Where's George?® 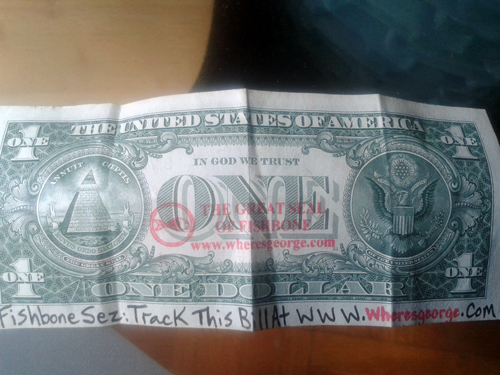 Yeah, it took me a while, but I finally got around to finding out where George had been...


On the Where's George website you enter the serial number of the bill, whether or not you're still in possession of it, zip code and then a brief note about the bill.


You can also choose whether or not you want to be notified when the next person gets your bill.

I clicked to continue and was pretty excited to see where this bill had been. Turns out my bill as only recently started it's journey. You can view the tracking report for it here. Now that I've tracked it, I'll add it to the rest of the singles in my pocket and bid it safe travels. I'm in NY so there's a good chance that dollar bill will end up in the hands of someone not from here.

A few hours after tracking my bill, I received an anonymous email from Where's George about my bill, informing me that I'm also now part of a "study to help find how a virus, like Swine Flu, can spread across the US." They included a link to the NY Times article, "Predicting Flu With the Aid of (George) Washington" about the study. Wow. I wanted to spend the bill somewhere so that would get into the hands of a foreigner. I can't help but think about Rise of the Planet of the Apes (yes, my obsession with chimps and Caesar continues) I realize how small the world is and how scary that may be for some people. I wanted to spend the bill somewhere that it can get into the hands of a foreigner.


Next, I should draw my signature smiley face and  write "Native Creative New Yorker" on my own bill and track it. If it ends up in Paris...