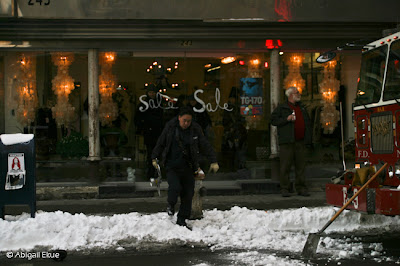 Turns out my Saturday was pretty eventful. I wasn't going to sit at home. And quite frankly, the cold temperatures lured me outside. I like the cold. I own a great coat. Ergo, cold isn't so.

On the third and final leg of my walk, I heard sirens and saw a fire truck speed across Grand St while I walked south on Ludlow. When I made it to the corner of Broome, I stumbled upon a scene: 2 fire engines, a group of people being evacuated from a restaurant and neighboring business. The fire engine that sped West on Grand, finally pulled up on Orchard.

I whipped out my camera and started snapping photos of the fireman closest to me as he opened a fire hydrant. I heard a child crying and looked over and saw a woman rushing out of the restaurant.


I looked up at the buildings and didn't see any flames or smoke. Maybe the fire was in the restaurant kitchen or in a basement. I examined the crowd that was already across the street. No one looked distressed or worried.
I tried to get a shot of another crying child. "I wanna go home!" They managed to say between sobs. There was a slight tinge of guilt that washed over me as I aimed the camera at the child - like I was invading a moment. But I got over that. Unfortunately, the moment was lost when the child turned her head and someone walked in front of me.
After the scene was secured, the tension was instantaneously gone from the scene. I could also tell that many of the residents of the neighborhood had been through this before. They were unfazed.
I'd love to be a photojournalist. I tend to notice a lot more than most people and I want to capture timely moments.
At the end of my walk, I warmed my blood with a glass on vin chaud...

Get the flash player here: http://www.adobe.com/flashplayer